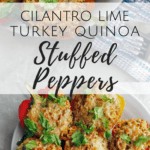 It’s been awhile since I have made a stuffed bell pepper and posted it on the blog. Since bell peppers are coming back into peak season, I have been seeing so many fresh, beautiful peppers at my local grocery store and they’ve been on sale too. A big plus for people like me who try to stick to a budget.

Stuffed bell peppers are such a versatile meal because you can fill them up with so many different ingredients, and they can be easily adapted to fit dietary restrictions.

From the classic American ground beef, white rice, and cheddar cheese to orzo, black bean, and corn for a vegetarian option; stuffed peppers can be changed up to suit your flavour and diet preferences.

For these stuffed peppers, Scott requested that they have a zesty and bright cilantro-lime flavour.

I chose to use protein and fibre-rich quinoa and lean ground turkey to fill the peppers. These two ingredients are not only super filling and healthy for you, but they are well-suited to take on the lime, cilantro, and spices used in this recipe. The spicy jalapeño monterey jack cheese gives it an extra flavour boost too!

I hope you enjoy this recipe!

The ingredients for the stuffed peppers (minus the cheese! I forgot to add it before I took the picture!). The amounts are listed in the “Ingredients” list below.

The ground turkey-quinoa mixture is ready to fill the peppers!

I like to cut the peppers lengthwise and then remove the seeds and white membranes. The stems are inedible, but I like the appearance so I leave them on.

The stuffed bell peppers are placed in a large casserole dish (or roasting pan) on a shallow layer of water, covered with aluminum foil, and baked at 400 degrees F for 30 minutes. Then, more cheese is added to the top of the peppers and it is baked, uncovered, for another 10 minutes.

I like to top the stuffed peppers with fresh cilantro right before serving. Enjoy!

As a participant in the Amazon Services LLC Associates Program, I only link to products that I use and/or highly recommend. As an Amazon Associate, I earn from qualifying purchases if you purchase through these links at no additional cost to you.

green bell peppers make me sad. they're one of the few veggies that i pick off, partly because i know how good red and orange ones are. anyways, these sound delicious! super hearty, while making use of all those summer peppers (: i'd probably add garlic because i am a garlic fiend (;

Garlic would be a great addition! Thanks Heather!

I can't wait for the peppers in my garden to come in so I can try these! I love quinoa and cilantro and lime - perfect combination!

Thanks Melissa! Getting peppers straight from your own garden sounds amazing!

Stuffed bell are one of the first things I ever cooked (when I was like 5) so they hold such a special place in my heart. These look great, Marie! Happy Monday!

Thanks Kelsie! I never had a stuffed pepper until I was an adult! It is such a great, easy go-to dinner!

I love stuffed peppers and your recipe looks super yummy! I love the way you cut them! Beautiful photos!

Welcome! My name is Marie.

I share easy recipes using fresh, seasonal ingredients that are big on flavour and (mostly) healthy. A few not-so-healthy desserts sneak in too. Most recipes are 10 ingredients or less and/or 30 minutes or less. 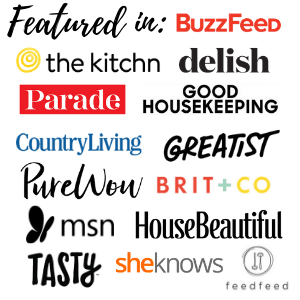